Please note: a £1.25 Transaction Charge will be applied to your booking

Don't Shoot Me, I'm Only the Piano Player. 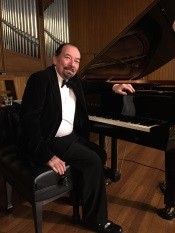 A runaway success in London’s West End, successive Edinburgh Festivals, the Melbourne Comedy Festival and right across the USA, this entertaining show is a hilarious send-up of classical music.

Australian pianist, David Scheel, is one of the finest solo musical comedy performers in the world. In his concerts, you can expect to hear anything from a well-known folk tune played in the styles of various famous composers; two different pieces played with different hands at the same time; and a medley of the 20 worst tunes ever written. His raconteur-style includes hilarious stories of pianos that he has played, accompanied by sharp-edged commentary on the lives of various celebrities and politicians.

“As funny as any, wittier than most, and, uniquely, a concert pianist of international stature...He stands alone, in a class of his own.” - BBC Arts Review

“The only show in town that can satisfy lovers of classical music and comedy alike.” - San Francisco Chronicle